Its 2:45 am and the Slieve Donard carpark is practically empty as Nigel, Denis, Robbie & I line up under the arch and set off on our merry way. It’s a beautiful night, the temperature is much warmer than expected and the visibility is excellent.  As we went up the Slieve Donard path, I was thinking to myself how long it had been since I had done a 24-hour event. The banter was good as we chit chatted and remarked how obsessed we had gotten with the weather over the past few weeks. This night was to be cold per the weather forecast but that wasn’t to be the case. Off came my jacket after 30 minutes and there it would stay until the last 2 hours or so. Indeed we were blessed with the weather.

The first leg was estimated at 5 hours and made up about 1/3 of the distance and climbing. We made short work of the trip up to Slieve Donard, 5 minutes ahead of schedule. It really was a beautiful night. Nigel did an incredible job navigating and so he would throughout the day – all from memory.  We only had about 2 hours of darkness until the sun slowly crept up and we were treated to a beautiful view of the lights of Newcastle and the shimmering sea. It really made you think how lucky you were to be experiencing the whole thing. We had decided to try and keep as light as possible and the pace was fast as Nigel and Robbie tracked ahead like mountain goats. On the side of Cove Mountain, we spotted a tent in the distance on some mountaintop and a guy was out watching the sunrise. I’d say he thought he was dreaming as he saw 4 people running past. I made sure to give him a wave in case he would come across my body in a peat hag, such was the pace we were moving at. Holy crap I thought, there’s no way I can keep this up for 22 hours which was the time we were aiming for. I just thought to myself, break it down into each section, and see how you go. I knew I wasn’t the best-prepared training wise for the event and all the climbing it would entail but I think I have a high threshold for suffering. This section was breath-taking in the sunlight and we crested over a ridge and saw Ben Crom reservoir in the valley below. The descent off Binnian was quad bashing but we weren’t far from our support crew lying in wait in Silent Valley. Our T/A was really quick and I found myself running after the lads to catch up. Keith was new to the role of support crew and we think he was surprised by the 45 seconds we spent in transition! 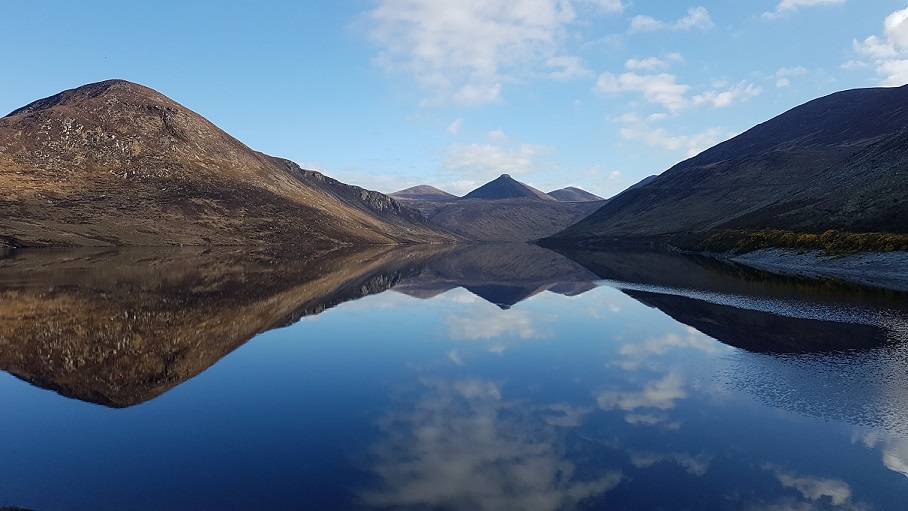 Nigel reassured us that the next few sections were shorter with less climbing and I found myself recovering a bit. The ground in this section was tough going in parts; long grass, heather, a few swamps and peat hags. I ran into a swamp and got soaked nearly up to my waist. It was just the thing I needed to cool down however as it was getting quite warm. We went to the other side of Silent Valley before turning an easterly direction and heading for Deer’s Meadow where we would meet our support crew for the 2nd time. We ran quite a bit of this section too. It was great to see our support in the valley below as we descended off Slieve Muck. Keith and Leo did a super job of attending to our needs. I tucked into an expedition meal here and a bottle of Lucozade. I was finding it hard to eat up to this point. Babybels were going down nicely though. Aaron Shimmons joined us for a bit in this section which was really nice of him to come out and lend his support. 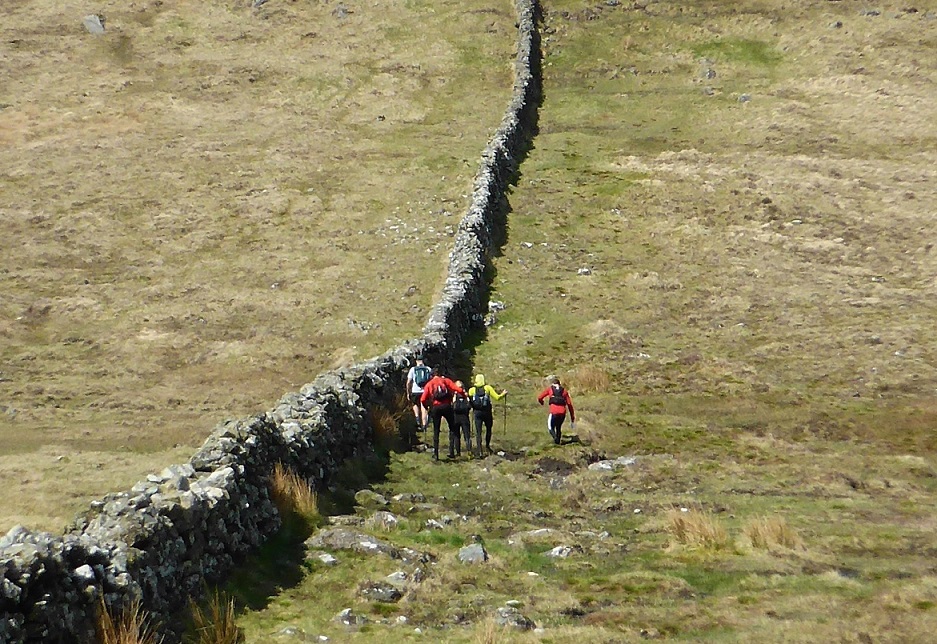 Nigel and Robbie tore off again and Denis and I were considering dividing into 2 groups as we felt we were holding them up. However, Nigel & Robbie being as decent as they are said they were in the red too and we would stick together for the remainder of the round. Great teamwork. The ground was rough in parts as we headed towards Slievemartin. For me, this was the halfway point mentally.

The landscape was familiar around Slievemeen and Slievemartin as I had visited this area when I did the Mourne Mountain Marathon with Nigel back in 2014. We met Rowan around Slievemeen/Slieve Martin and it was a great boost to the spirits to see a familiar face. We were all sporting great farmer’s tans at this stage. We met our brilliant support team at the top of Slieve Martin again. A quick top up of food and water and we were off quickly. 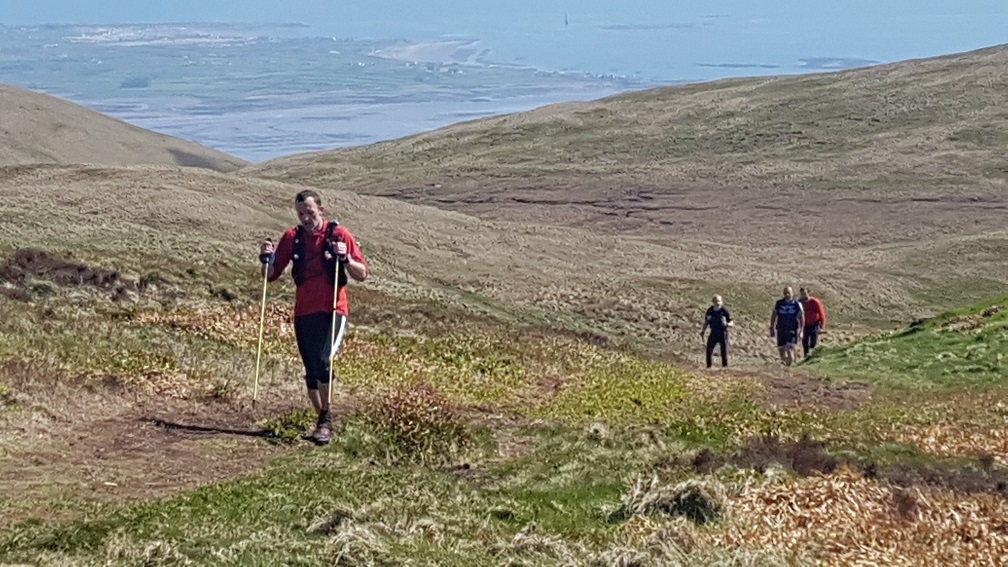 I won’t go back to Crenville in a hurry. The thick overgrown grass and hidden holes were a killer to our already tired legs. It was a relief to get out of there – Rowan helping to guide us in the right direction.   We entered Rostrevor forest and the fire roads were a welcome break from the soggy uneven mountain ground. We ran the flats and downhills wherever we could and walked the uphills.

However, it didn’t seem too long until we saw our support crew again in the col before Rocky. We met Aaron again around this section and this was the last we would see of him. What a legend. I remember thinking how much I’d love a 99 ice cream. We took as little as we needed as we would be meeting support again at Spelga Dam. We kept trucking on, one step at a time. The sight of Spelga Dam in the distance was a welcome sight. We had to clamour up over a wall to get into the car park and I felt like a 90-year-old woman as my legs were stiffening up. Our support had more expedition meals ready here and we munched on them as we took the gradual climb up to Spaltha. I marvelled at some of the quicker times of the Rankin Round and as I did the maths thought what type of superhumans they were.

We met our crew for the last time on the road before Ott mountain. We took our jackets, head torches and sufficient water and food to last the next estimated 6/7 hours. The next time we would meet them would be the end and this seemed very far away when we knew we still had the big climbs ahead. My legs were starting to disintegrate rapidly from this section on. When we climbed over Ott mountain, I recognised the rest of the route from the Mourne Skyline run which I had completed the previous October and year previous. That is one beast of a race. I knew the climbs ahead were going to hurt. On we went and pushed. One more step is one more step closer to home. Up to this point I had been slower on the climbs but I had been able to make up time on the descents. From now on, however, my quads were starting to hurt on the descents also as the power slowly trickled out of my legs. Up and down we went over Slieve Loughshannagh, Slieve Meelbeg and Slieve Meelmore. It was starting to get dark now and the looming beast of Slieve Bernagh was ahead. Now, with fresh legs even this mountain would probably frighten the most enthusiastic mountain goat but with I’d say over 5,500m of climbing and probably 80ish km in the legs I was dreading this climb. On a more positive note, we “only” had 4 mountains to go. My legs were well and truly gone at this stage and my poles were a life saver. I would count to 10 as I took each step and then start over. I could only concentrate on putting one leg in front of each other. I think we all visited a dark place that day. I resolved to quit long distance running and stick to 5 and 10ks!. The lads were great and I felt terribly guilty as I felt I was holding them up. It was a massive relief when we got to the top of Slieve Commedagh and could see the lights of Newcastle below. We made good time on the steep descent, but it seemed to go on forever. Eventually, we hit the forest and we were only a short distance away from the finish line. I really didn’t care much about time at this stage or any stage during the event, I just wanted to get it done in the 24 hours. It was such a huge relief to run into Slieve Donard carpark and run under the arch in a time of 22 hours and 6 minutes. 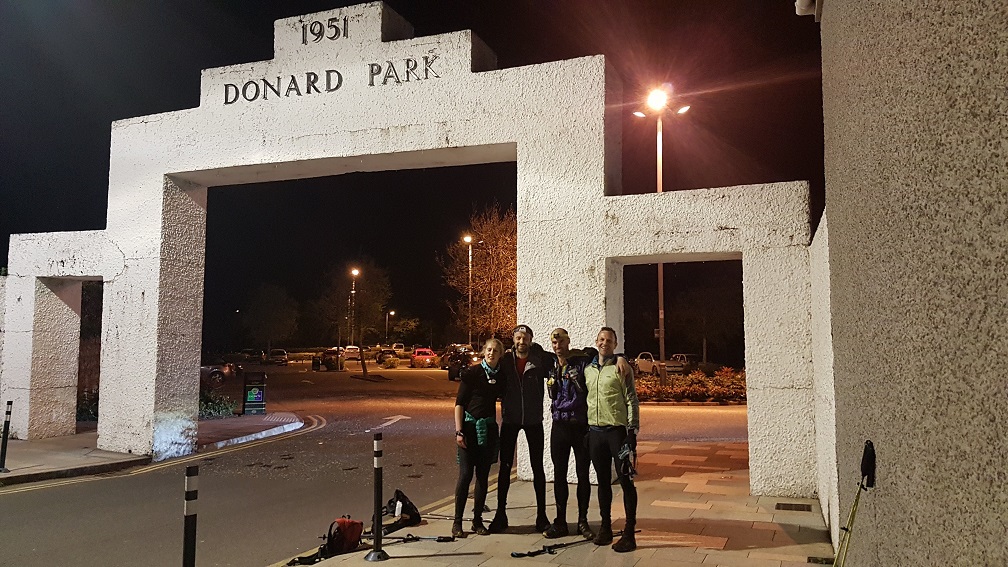 A massive thank you to my teammates Nigel, Denis & Robbie and to Leo and Keith who looked after us and fed us. And of course thanks to Aaron & Rowan for joining us during the day. The Denis Rankin round is a truly epic day out. Challenging & demanding but rewarding in equal measures.

P.S. The author went for a 30-minute jog 3 days later, plans to quit running for good are on hold 😉