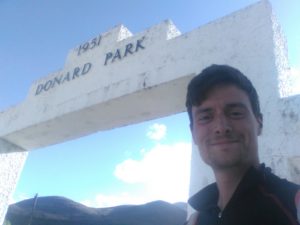 On the way to Northern Ireland for work, I was looking up possible long running routes for a day off I had two and a half weeks later. I only then came across the Denis Rankin round, and the story of Denis Rankin himself. I’m amazed it’s not more known about in England, but hopefully, it will be in time. I had been to the Mournes once before and had run up Slieve Donard in the mist, so didn’t really know the route at all. However, it looked inspired, and since the only real downside was the chance of failure, I planned to give it a go. 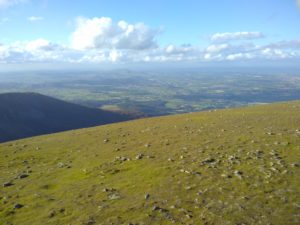 I started in the sunshine at 17.40 on the 16th August, wishing I had got there earlier but I had been working that day. I was unsupported, with a bag containing plenty of food and waterproofs. In the three and a half hours before darkness, I made it to Slieve Binnian, with sunset giving way to a starry sky after the crescent moon set soon after the sun. 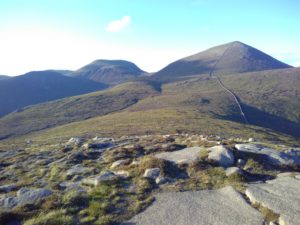 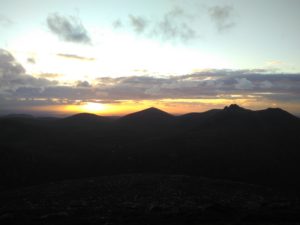 With head torch now on I descended to the Silent Valley reservoir and had a proper break before the long section of night navigation. Happily, the weather stayed calm and dry up to Slieve Muck, where cloud began to cover the summits, and the wind picked up. After a total of 8 hours of darkness, with very low visibility from Eagle Mountain onwards, dawn brought a drop in the wind and I finally turned the torch off on the way up Slievemeen, a key moment as I was now on the return journey. One moment that made me jump was being hissed at by a badger on top of Pigeon Rock Mountain. I think we startled each other. 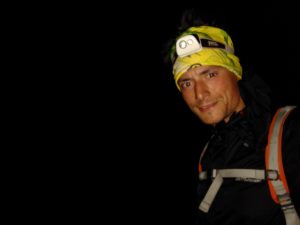 Low cloud continued with the dawn, despite good views on the cols between peaks. I found the next section to Slievemeel very tough with the amount of vegetation, but I was glad to be able to see my way. From here to Cock Mountain the clouds lifted from the summits and I had a great section of running, able to admire the landscape again. 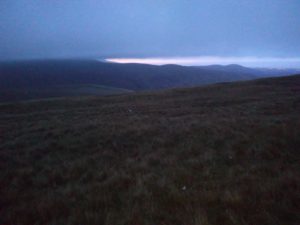 I was feeling good passing the Spelga Dam car park and beginning the final section, with those last ups and downs back on the Mourne Wall unavoidably ahead. Sadly at this point the low cloud, driving rain and wind returned, soaking through my jacket with impressive speed. I was looking forward to the view from Slieve Bearnagh, but all I got was a soggy granite tor and zero visibility for a last snack before the home straight. The final descent into Newcastle brought a slight clearing followed by more rain, as I passed under the white arch to finish 20 hours and 52 minutes after starting. 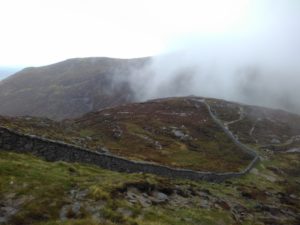 I was happy with my overall strategy, even though the 8 hours at night undoubtedly slowed me down, as I only had one day in which to attempt the challenge. Sometimes timing is never perfect, but you just have to go for it. I took wraps, protein bars, electrolytes and energy powder, aiming to eat something every hour, a schedule I stuck to up to the last 4 hours where I just ate when I felt like it. I’d definitely come back and do it again one day, especially to see more of the sections I did in darkness or cloud. It’s a fantastic mountain range and a tough but awe-inspiring challenge. 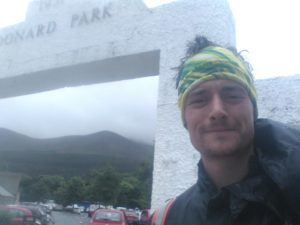