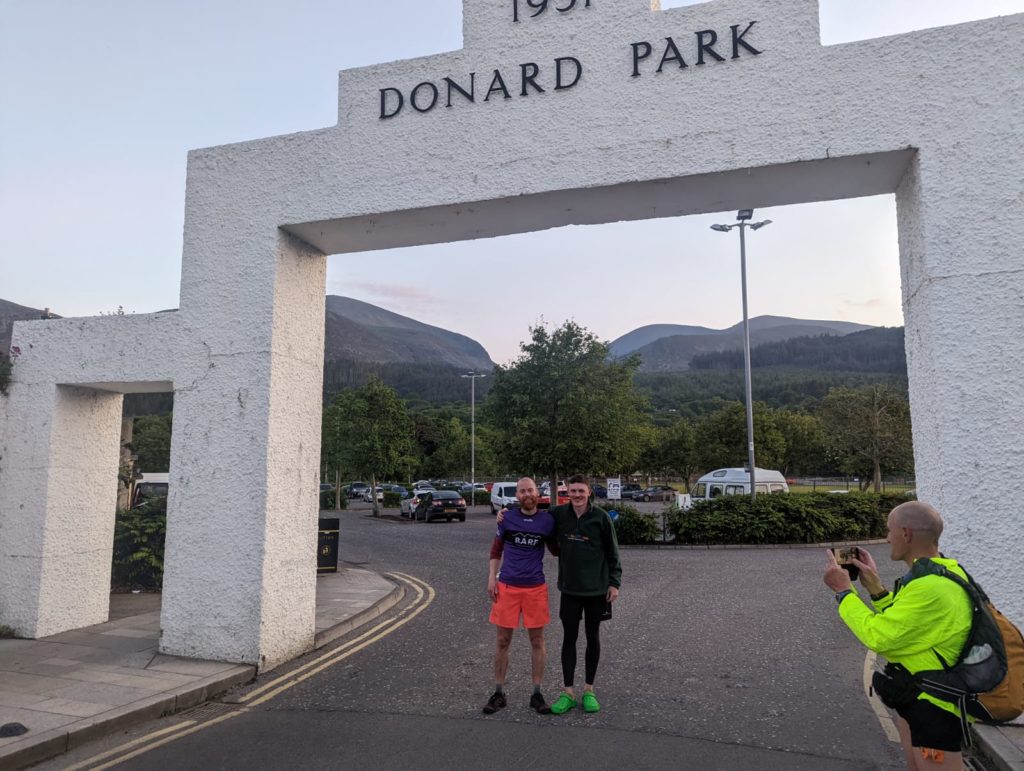 Preparation As part of our preparation, we incorporated the 5 stages as part of our training. We had hoped to have covered some bigger miles before the event but alas life got in the way for all of us with our biggest pre event run being around 24 miles. David Turkington was flying in from Scotland to partake in the event so navigation was left to Dale and Michael.

END_OF_DOCUMENT_TOKEN_TO_BE_REPLACED

On Sunday 4th July, Billy Reed completed the first Double Rankin Round in a time of 43:17.
Click here to read his Round report

You can also view a short video by daughter and crew chef, Chloe.

On Sunday 16th May, Irish round expert Shane Lynch set a new outright course record on the Denis Rankin Round. Shane ran in the anti-clockwise direction to complete his tri of round (clockwise, anti-clockwise and winter). Here’s what Shane had to say about his record-breaking 13 hours 20 min round.

This Sunday was the first weekend that I could legitimately travel beyond a COVID 20km radius since before Christmas. (The last weekend that I could travel back in December was completing Cassie’s Challenge). So being without any races or challenges for months I was going to complete the Rankin Round this weekend regardless of the weather. It was nice to have the gang of Karalee, Craig, Lynne, Steven and William to see me off at 5am. The conditions as it turned out were near perfect, cloudy so not hot; only light wind and pretty much dry. Just fog to Ott, Butter, Spaltha and Rocky – so compass work there. Progress was good early on, drop bag at Spelga. Was up half an hour on my fastest estimate by Slieve Martin and so reached there before my support and so missed out on drinks and food replenishment. Suffered a bit then up Finlieve as far as Eagle, having to walk most of this and sit in places. Clicked back in gear thereafter and it was a pleasant surprise and real boost to see Karalee at Deer’s Meadow and she had drafted in Andrew to help also. Coke and food and I was back strong up Muck. Progress good through this leg to Silent Valley. Andrew was back again at the Valley with some hot chips, exactly what was needed before the steep Binnian climb. Was fading by near the top but was given a boost to hear Robin’s booming voice and encouragement from the summit, much needed support that got me cruising down to the saddle where I could see Billy and Alan just ahead on Lamagan. It was a real bonus to have Billy running the same day and we walked to the top together and thanks to Alan for the sports drink. A very welcomed sight was Craig waiting for me at the top of Lamagan to take me the last ~15-20km back to Donard Park. I said to him I still had some running in my legs and he set off at a fast tempo down Lamagan and we maintained it to the end. I had just taken water with me from Binnian and so to see Andrew back up again at Rocky with Coke and then again at the saddle before Donard with more, gave me the energy that I desperately needed in this final stretch. I know I would not have got the overall record without Craig dragging me on at a tempo I would not have sustained alone and also the needed energy boost that Andrew provided towards the end. Ran hard down the Glen River, with Karalee and Jim and his wife at the Arch to cheer me in, along with a number of others. The appetite is still there!