At midnight on Friday 5th October, “Newcastle AC” runners, Mark King, Stephen Wallace & Dominic McInerney, along with a team of assisting runners left Donard Car Park at the start of their attempt of “The Denis Rankin Round”.

The Denis Rankin Round (or “DRR”) is a circuit of all the major peaks in the Mourne Mountains over 400m in height, covering 90km and 6500m in ascent. The challenge is to complete this within a 24 hour period, however, in this instance, the trio were aiming for a completion time of 22 hours 42 minutes. 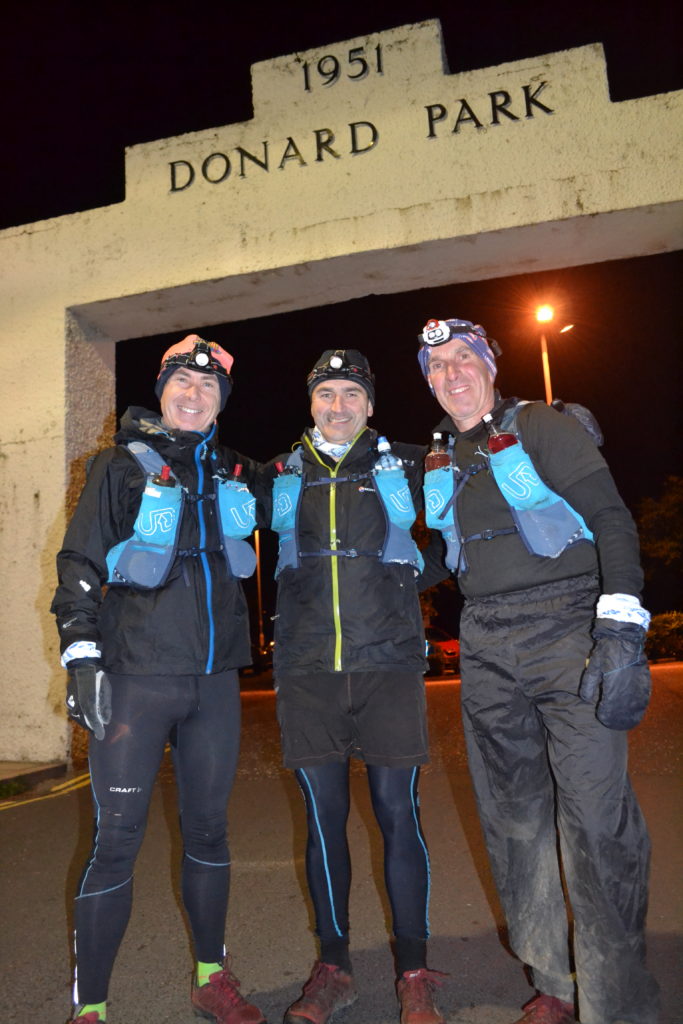 Mark King, Dominic McInerney & Stephen Wallace at the start of their “DRR”.

The Round is named after Denis Rankin, a pioneer and leading light in fell running and mountain marathons in Northern Ireland since the 1970’s, who tragically died on 16th May 2013 competing in a fell race on Slieve Moughanmore.

This is not an organised event but a challenge open to all who believe they can circumnavigate the beautiful, rugged and demanding mountains of Mourne within 24 hours. To date there have been 34 people who have completed the challenge, however, this is the first Autumn attempt, where poor light and the potential effects of adverse weather impact on the time taken.

The “DRR” is comprised of 5 separate legs and it is common for the runners to be accompanied by both “Navigators” and “Support Runners”. The Navigators assist in guiding the runners over the various summits and verifying that the entire course has been completed, whilst the Supporters generally carry food, water, clothing etc, which may be needed by the runners. Normally fresh Navigators and Support Runners take over at the end of each leg, during which time the runners will stop for food and/or a change of clothing & footwear. The average time taken to cover each of the individual legs typically ranges from 3.5 hours – 5.5 hours.

The three runners plus Support Team left the official starting point at the arch into “Donard Park” at exactly midnight to a fanfare of encouraging cheers from a mix of supporters and interested spectators. Progress through “Donard Forest” was swift, however, the pace quickly dipped as the runners reached the start of the DRR’s longest single climb to the top of “Slieve Donard”.

Perfect weather conditions led to a steady pace being adopted and by the time the first mountaintop was reached the runners were already +15 minutes ahead in their overall “target time” for this Leg of 1 hour 25 minutes.

Upon leaving the “Donard” summit, the underfoot conditions deteriorated quickly to heavy bog (an area aptly named “The Bog Of Donard”), which quite literally dampened progress. Notwithstanding, the group pressed on over the next five peaks (Chimney, Rocky, Beg, Cove & Lamagan) and by the time they reached the final descent into the Silent Valley the runners were still marginally ahead of schedule by +12 minutes.

The time taken to complete this leg was 5 hours 14mins. 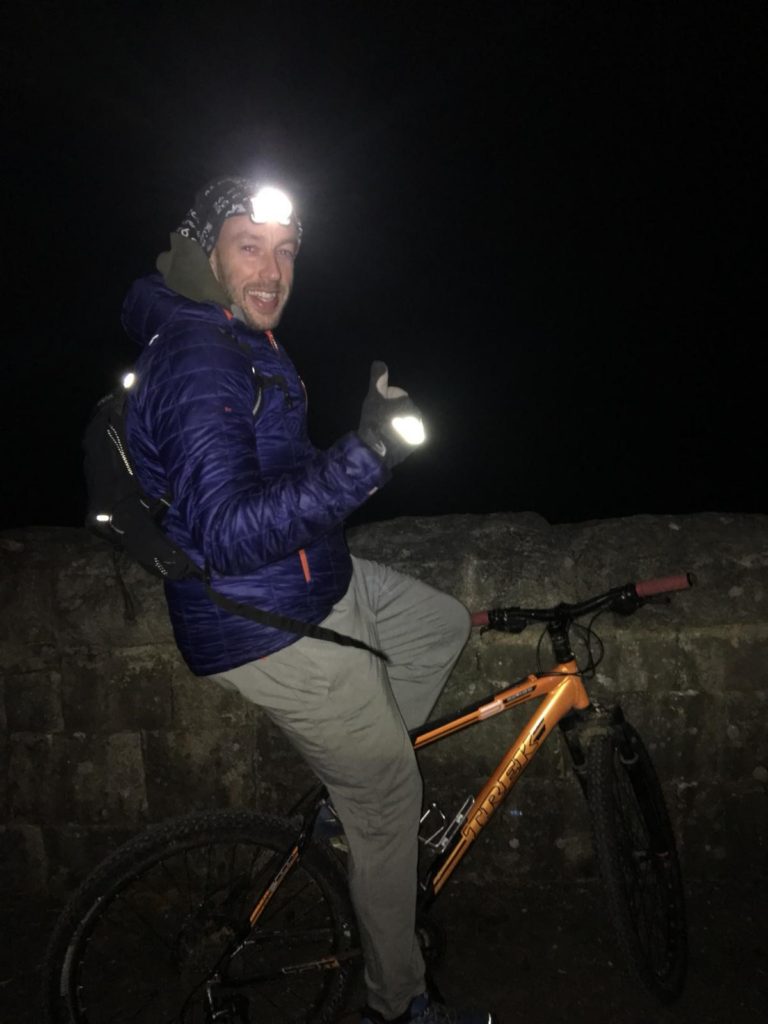 Cahal Kielty in a buoyant mood (at 5am!) after successfully seeing the runners through Checkpoint 1

A key difficulty with this Checkpoint was that due to the early morning start, the gates of the Dam complex were locked therefore our two trusty helpers had to negotiate gates then cycle up to the meeting point fully loaded with bags of food, drinks & clothing.

To ensure a successful completion of the “DRR” the time allocated for each Checkpoint was strictly limited to 15 minutes and in order that each of the runners were satisfactorily fed, watered and re-clothed, the able assistants were kept busy.

After a 15 minute stop at the end of Leg 1, the group of 5 (Willy was feeling unwell) set off at 5:29am for the initial climb on Leg 2, Slievenaglough. Despite the fact that they were in complete darkness the clear sky and perfect weather conditions assisted in ensuring that the running schedule was being bettered at every peak and by the time the ultimate peak, Slieve Muck, was reached the troop had achieved a +22 minute advantage on the schedule. The “Bailey Brothers” played a blinder over this leg ensuring there were no navigational errors, which could easily have resulted in a loss of time previously gained.

Although the entire group moved in convoy like unison and were making good time it was evident that the darkness and lack of sleep was taking its toll as there was little by way of small talk or intergroup communication.

The cumulative time scheduled for completion of Legs 1 & 2 (including the stop at CP1) was 9hrs 17mins, however as the runners covered these sections in 8hrs 54mins a creditable positive variance of +23mins was achieved.

This was the first of the major checkpoints and the first change in the support team. Logistics at this juncture were of military precision, with a core of 11 people assembled to ensure the runners were suitably fed, watered and had a quick change of gear, dispensing with head torches etc. before setting off once more into the grey mountains.

This was the first full “daylight” Leg and with a clearing sky the group of 5 made steady progress into the lesser known southwestern “Mournes”.

The southwestern side of the Mournes are off the usual day trippers route and with the exception of “Batts Wall” has little in the way of established tracks or identifiable landmarks. Consequently, Leg’s 3 & 4 contain a higher degree of heather and heavy grass, which are both energy sapping and tedious – not to mention frustrating to traverse.

Notwithstanding the above, good progress was made over Pigeon, Moughanmore and Wee Moughanmore before the long grass towards Eagle Mountain slowed the pace. From Eagle Mountain to the top of Shanlieve was reasonably fast, however, the peat hags leading to Finlieve meant the pace was reduced to a steady walk. At this stage, ultimate reliance was placed on the excellent navigational skills of Dale Mathers.

The group reached the top of the final summit on Leg 3 (Slievemeen) within 12 hours of leaving Donard Park, which meant the group were up +15 minutes for the leg and +50 minutes overall.

“The Good, The Bad & The Ugly” – in whatever order you think!

The crew at “Checkpoint 3” were a welcome sight and thanks is given to the guys & girl for all of the effort put into carrying all the necessary supplies to the top of Slieve Martin (and down again) – no mean feat in itself! 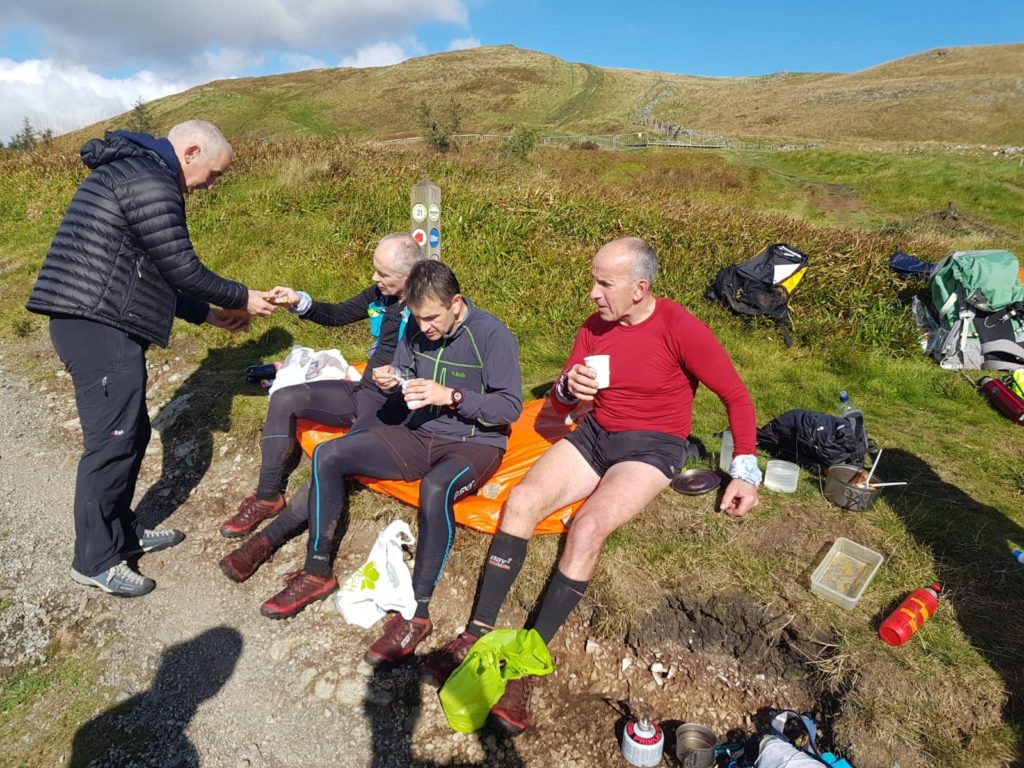 Undoubtedly, this was the toughest Leg of the “DRR”, due to the underfoot conditions on lesser-known mountains such as “Crenville”, “Slievemeal” & “Tievedockdaragh” plus the general level of fatigue which had set in after circa 16 hours out on the mountains. However, despite the general levels of exhaustion, the overall mood was buoyant due to the blue sky and the unwavering support shown all along the route by the Support Crew plus some bemused hikers.

Aaron Shimmons (“DRR” committee member) took the time to travel to the foot of “Rocky” to encourage the entourage and wish all well – much appreciated.

The summits on this leg were quickly being picked off with the exception of the long climb from the foot of “The Hen Track” to the top of “Cock”…this was the penultimate and longest, effort before the final mountain of the leg (“Slievenamiskan”) was reached. From its summit, the dark waters of “Spelga Dam” came into view.

Looking down from “Slievenamiskan” was inspirational as in the distance could be seen the welcome sight of a large group of supporters waiting patiently at the car park for the final Checkpoint.

Chairs at the ready, timer set, food prepared and coffee suitably brewed, this was the final stop before the long trek back to Donard Park. This being the case the group stocked up and took the opportunity to replace wet clothes and once again donned head torches for the nighttime journey back to Newcastle.

It must be noted that the level of organization at the checkpoints was exceptional with full credit to Phil Hodge, ably assisted by Greg McCann. In a different life, I have no doubt they would make excellent “Wedding Planners”!. 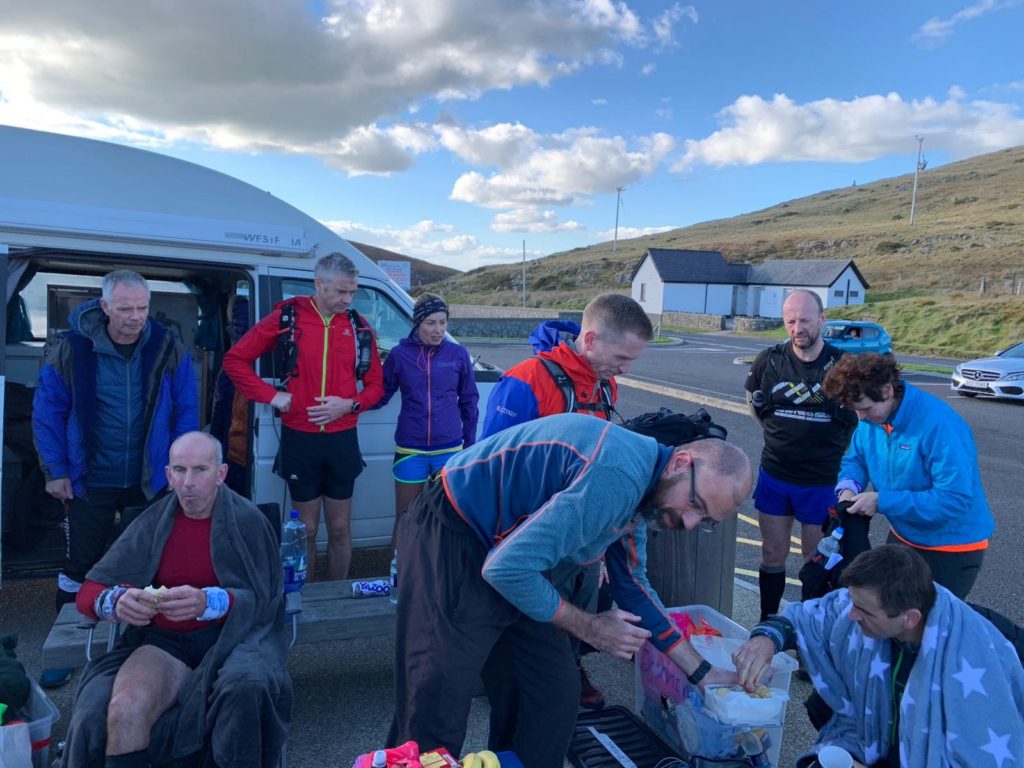 This final Leg summits ten mountains – the largest number of any Leg of the DRR. Regrettably, the worst was kept to the last, with four of the final summits ascending >700 meters. As the group started this leg at 4:17pm, the strategy/target was to reach the “Mourne Wall” before darkness.

The initial three mountains lead over the gentle slopes of “Spaltha”, “Slievenamuck” (where Aaron Shimmons was waiting to encourage us on our way) & Ott, and were quickly dispatched before meeting the Mourne Wall (at exactly 6pm). It is said that “Timing is Everything” and in this instance that age-old adage was right. Reaching the Wall before nightfall was critical to ensuring ease navigation, as the wall can be “handrailed” over the final six mountains plus the descent off Commedagh – easier said than done in the dark. However, there was no fear of being in the dark because due to the time advantage, which had been amassed, the group were able to make it the whole way to the “Hare’s Gap before the torches were even considered.

The trio of King, McInerney & Wallace were now on “home turf” – an area they have spent years training on. However, experience of the area was no substitute for extreme exhaustion, the cold and darkness. The consequence of the aforementioned should have translated to a snail’s pace progress, however adrenalin was flowing and the trio pressed on at a steady pace.

At this stage of the challenge each of the remaining “big” climbs should have been daunting, however, the “smell” of a successful DRR buoyed the mood & pace. It was, however, Slieve Bernagh that proved the biggest challenge of the Leg. Due to its gradient and tractionless surface, every step upward was being carefully made in order to avoid cramp being induced into spent leg muscles.

“The Hare’s Gap” was a welcome rest from the climbing /descending and at this juncture, the Team were expectant of beating the scheduled time of 22hrs 42mins. This being the case the pace lifted (yet again) and an assault on the final climbs was made.

Slievenaglough (not the same as Leg 2) and Slieve Corragh were covered in less than 1 hour and at the foot of Commedagh, it was clear that nothing short of a disaster would cheat the Trio from completing their DRR well within the 24-hour time limit.

With Commedagh out of the way, it was downhill all the way to Donard Park. The lights of Newcastle looked to be within touching distance, but there was no free-wheeling and so a steady pace was adopted toward Donard Forest.

The Group of 7 were met at the exit of Donard Forest by fellow Newcastle AC members, Patrick Higgins & Mari Troeng who accompanied the posse to Donard Car Park.

King, McInerney & Wallace (plus Support Team) were overwhelmed by the greeting they received from a loyal and jubilant group of friends, family and fellow runners.

Finish time was 20 hours 55 minutes 45 seconds– well within the allotted 24 hour time limit ensuring that King, Wallace & McInerney would pick up membership numbers of 35, 36 & 37 of the “DRR” club.

The giving up of ones time, plus expending effort to travel and help in whatever fashion on this round was greatly appreciated and although there were many people who deserve special thanks we consider that Phil Hodge, Greg McCann plus Dale & Denise Mathers need particular mention and a great “Thank You” for making this event possible. 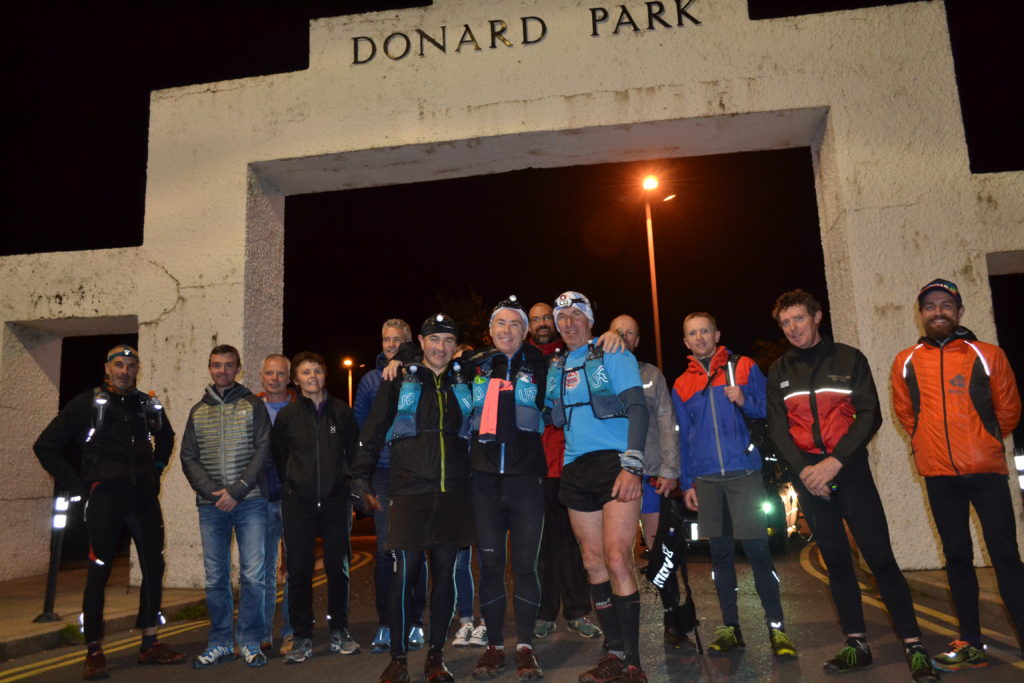