I had attempted a Denis Rankin Round last autumn, but I lost.

I lost:   a contact lens going up Donard, the sole of my shoe coming off Wee Binnian, my sense of direction approaching Tievedockaragh, the will to go-on, when I found myself at the top of Hen, not Cock.

By bailing at that point, I also lost the potential to do the round unsighted, but had a great day out in cracking hills.

On April 30th, before 1am, Alex and I stood under the arches at Donard Park again, took the obligatory photo and got ready to set off. An enthusiastic team of boy-racers in the car park meant that we didn’t hang about until 1am and left  a few minutes early, going up the tourist route to Donard. A brief diversion meant we stumbled on two campfires in the forest, likely as surprised to see us as we were to see them. 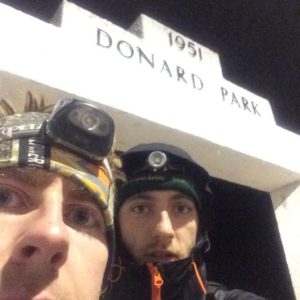 We made steady progress, straying from the planned route a few times in the dark, and could see some light coming into the sky as we climbed to Binnian. Having passed Binnian North Tor I heard a shout that sounded like an abridged version of ‘furious duck’. Alex sensibly but disappointingly pulled out at Silent Valley.  Leg 1 split 4h 52m

I went on making reasonable progress. I had debated going north or south of Doan coming from Ben Crom and, although more familiar with a southern line, saw a great trod to the north. The trod gods smiled on me, showing me trods where there were none and I arrived at Deer’s Meadow 7h 47m after starting, glad to see my big sister and Alex, who by then had taken over supporting, relegating sister to chauffeur. Dry shoes and socks were bliss, until they got again wet on the way up Pigeon Rock.

Weather conditions were great, visibility was boundless and there was little growth underfoot. The run from Shanlieve to Finlieve was made easy with the clear sky, I have a habit of falling off a bearing across there, so it was nice to see where I should be going. I used some forest trails to get towards Sleivemeen. Being seen by some mountain-bikers forced me to look like I was out for a run and speeded me up a little. They were also at pains to inform me that rain was coming. Luckily, it was hail instead, so I stayed dry and reached Slievemartin after 11h 04m. 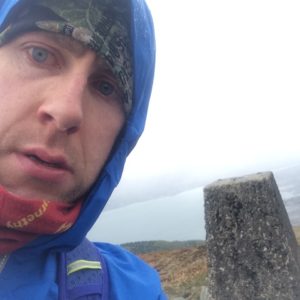 I don’t like Crenville and got it over with. Coming off Slievemeel I saw two runners to the north, and knew that Aaron was due to be out on leg 4 that morning, I caught them up. (Easily achieved as they were stood looking at a map for 10 minutes. Nobody should get the impression I came off Slievemeel like an olympian, except, maybe, a very bad artistic gymnast). Introductions were brief, but company was great and again, made me move faster that I would otherwise have done and turned my head off for a while, to the  extent that I needed to be pointed in the direction of Rocky (Leitrim Lodge) when we parted company on Tornamrock.  I learned from my mistake last year, and although Hen is prettier (in my opinion) I struggled up Cock, and while the trod gods were laughing at me, I knew that Spelga, support and food were not far away. I am led to believe I felt better than I looked at that point. I felt middling at best, having been out for 14h 25m. 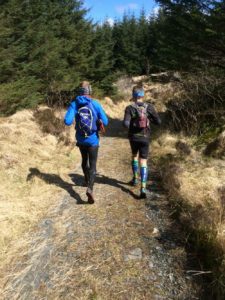 Porridge and coffee down, I was off again, feeling much better after food and buoyed by the imminent prospect of the Mourne wall handrail home. Alex, having seen me at Spelga, offered to run with me from the Carn-Loughshannagh col, I think, hoping I’d decline his kind offer, out of concern for his poorly ankle. It was not possible for me to hide my immediate surprise and delight at the idea, so selflessly, he joined me for a little of the last leg. We moved well along the Mourne wall, and ‘a little’ of the last leg, became ‘another little bit’, became ‘a little more’. Having passed Hare’s gap, it was too late for him to bail out early. The first rain of the day fell as we climbed Commedagh. The recent British champs race meant that trods off Commedagh were very obvious and we were back to Donard Park 18h 25m after setting off.

I was very lucky with the weather, cold and dry (mostly) suits me well. It’s still quite early in the year, so there is little growth underfoot, which helped. It was very disappointing to lose Alex, but it was the only sensible option in the circumstances. He made everything very easy for my road-support sister and for me. My last leg would have been much longer without him.  The extra time we took coming from Binnian to Moolieve together stopped me from going far too hard, far too soon.  Alex wants to thank my sister and family for collecting him from Silent Valley (and to the gatekeeper for opening the gate specially so he didn’t have to jump it!)

The Denis Rankin Round is a fantastic tour of amazing and very varied hills. While I have got around in the quickest time, to date, I have no illusions that this record will not, or should not, stand for very long. I’m a stubborn, middle of the pack, hill runner, who had great support, luck and conditions, with a relatively new round. Thanks to Niamh, Alex, Aaron and Stuart for their support and encouragement on my way around. I hope to see lots more completions, as it will mean more runners get to experience the beauty of the Mournes.