For umpteen reasons, we decided the weekend of 21st/22nd July had to be the one when we would give the Denis Rankin Round a go. Off the back of a number of recent hill race events, we were hoping our knowledge of the Mournes and the sheer pedigree of the team (terrier, greyhound, red setter and family labrador) would see us over the route.

At 2am, the first challenge was getting through the arch without getting knocked down by an irate taxi driver. We took off across the car park, and proceeded to head in four different directions, looking like a scene from Monty Python’s Silly Olympics. A super start. 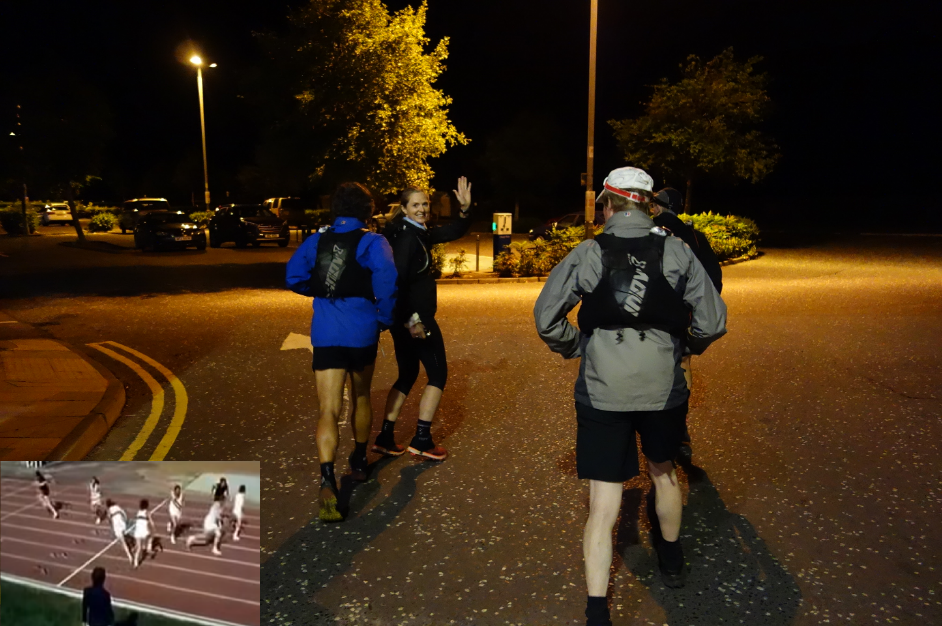 What else would you be doing at 2am?

Ascending towards Slieve Donard, it was coats on, coats off, coats on again, and they stayed on the rest of the night as we disappeared into the mist. Marty and Clive set an eager pace over Chimney and Rocky and we were able to settle into a rhythm over the familiar tops of Lamagan and Binnian. A steep descent down to Wee Binnian was a wee reminder that some of us might need to look after our wee knees on this wee day out. Right on schedule, Susan and the kids were there to meet us at the Silent Valley. One stage down, four to go. 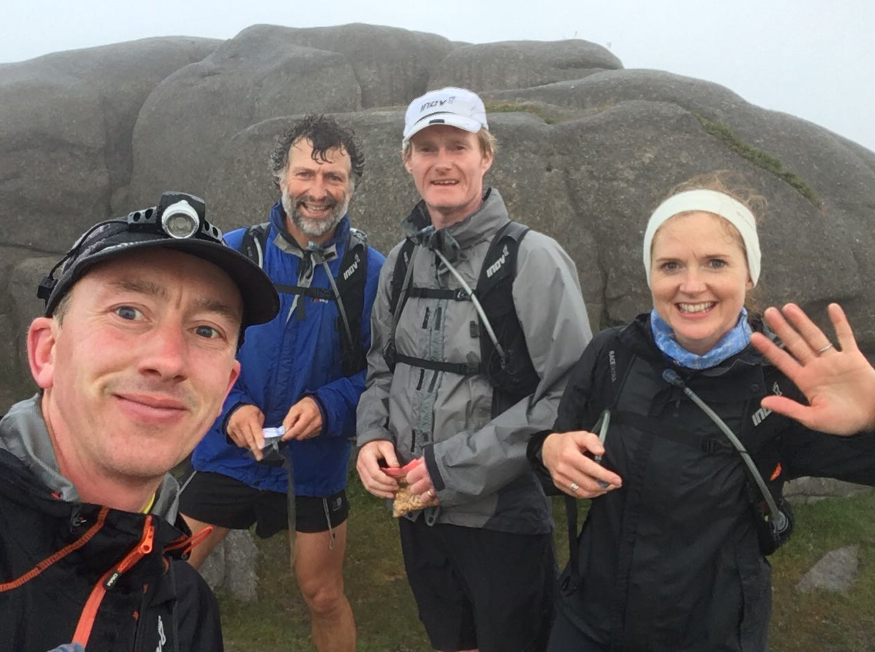 Chuffed at our timeliness, it was with a slight lack of urgency we transitioned and began Stage 2. Taking advantage of the dry ground though, we cut a corner or two and were soon up over Slievenaglogh, up the Banns Road and running along the sandy shores of Loughshannagh. We picked the line up Doan and resisted the temptation to stand on its summit for too long (doing the sums – 39 tops, a minute on each top, equals 39 precious minutes!). The peat hags of Ben Crom haven’t got any smaller in the last few years but the Brandy Pad beckoned and we steadily made our way over a misty Muck and down to the Deer’s Meadow, where Liam and Susan, and a few more friendly faces, encouraged us to refuel, while keeping us warm with spare fleeces and jackets.  I didn’t think I’d lose my appetite just as early into the day, so feeling a bit like a pâté de foie gras goose, I managed to shovel down a few spoonfuls of pasta bolognaise. Stevie did better with some bread and Clive was happy to have a jug of milk. However, Marty’s plate of savoury rice somehow ended up in the grass, tough times. 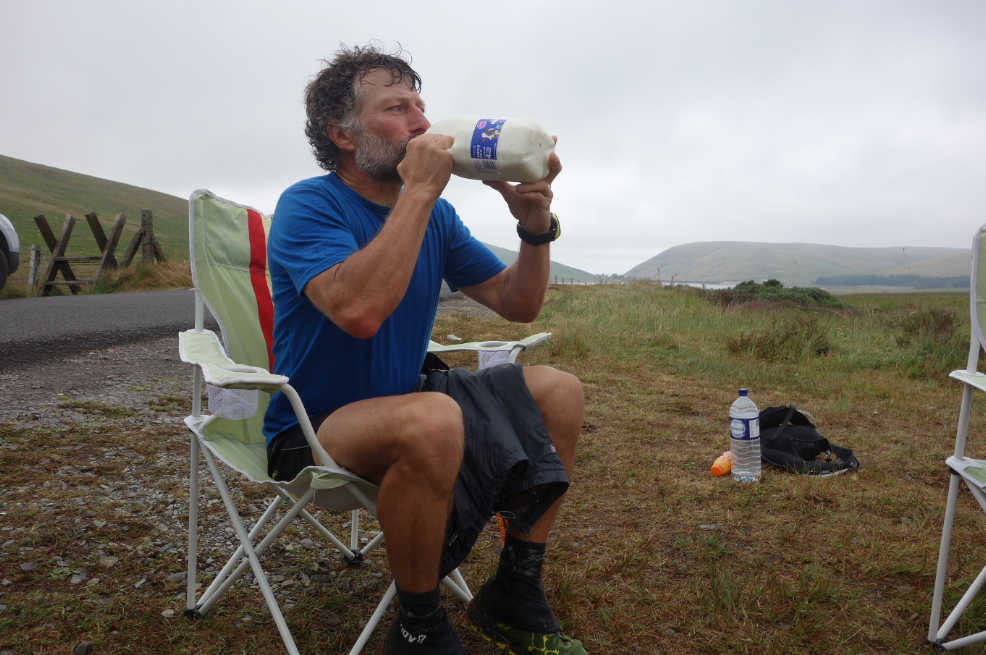 Magic elixir at the Deer’s Meadow

Part way up Pigeon, we heard a shout from Marty behind us and we turned to see him frantically running back down to the car at the Deer’s Meadow.  We’re still not sure what was so important to go back for but he seemed much happier for having backtracked, and was moving well, quickly catching us up. On Moughanmore, we gave a nod to Denis, remembering why we were there, and from the wall at Shanlieve we were, once again, extremely fortunate with superbly dry ground all the way over to Finlieve, giving us lovely running conditions. However, we were fast approaching the under-grazed southern Mournes and long descents in tussocky grass weren’t recommended for Stevie’s plantar fasciitis or for anyone’s achey knees. It was here we reckoned we could have made a more sensible route choice; cutting into the forest and onto a track would’ve been a better alternative to slogging across long grass just outside the forest boundary. We steadily climbed towards the mast, but if we’d known there was a cup of tea waiting for us on the top of Slievemartin, we might’ve lifted our feet a bit! Many thanks to Vicky and Paulette for hiking up to the summit with our supplies and a large flask. It had turned into a really pleasant afternoon and it was tempting to stretch out in the sun a while longer, supping tea and taking in the views with our fantastic support crew. But the clock hadn’t stopped. 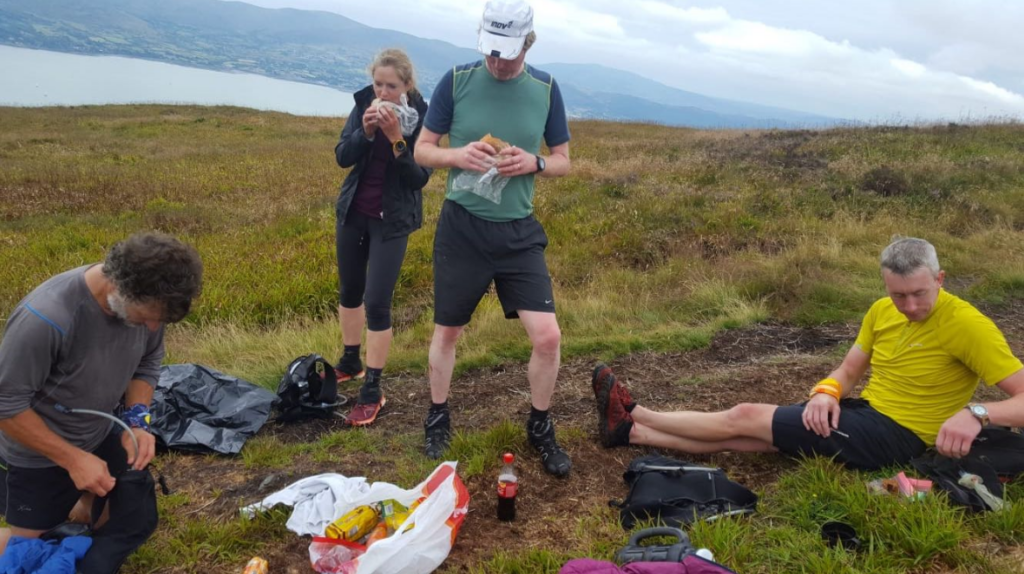 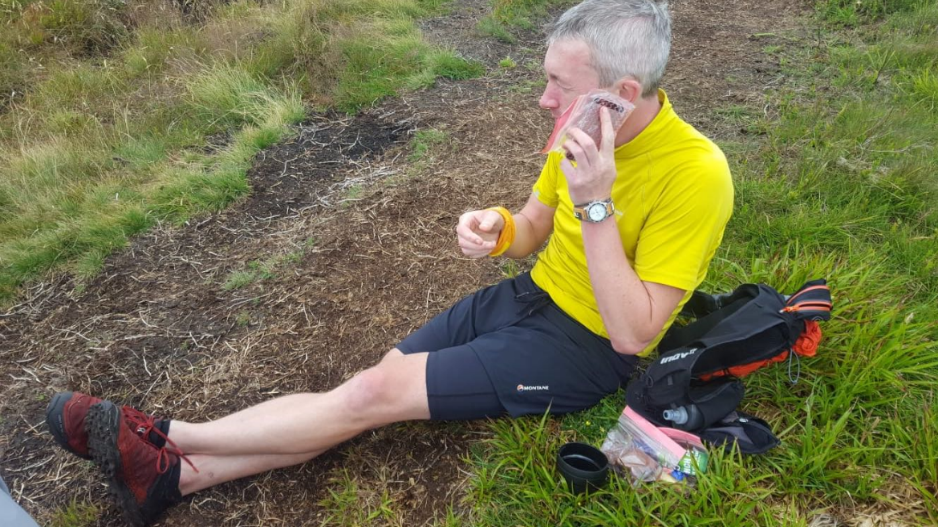 Soon we were heading for Crenville. Oh Crenville, with your five foot high grass and heathers and enormous invisible tussocks. We were like four drunkards, falling over at every step. Naively, we didn’t actually think this ground would be that bad. But if I never see Crenville again.. (note to the Mourne Mountain Marathon route setters – don’t be at it!) Our next top, Slievemeel, wasn’t much better; my advice would be to experience its beauty from the nearby mountain bike trail! Although the navigation gave little bother, moving through this part of the stage was truly energy sapping so it was a lift – for most of us! – to finally get onto Tievedockaragh and over to the well-trodden Hill and Dale trails of Pierce’s Castle and Rocky. Cock Mountain was another grassy encounter which kept the challenges coming right the way through this fourth stage. So Spelga Dam at the end of Stage 4 was a welcome sight. 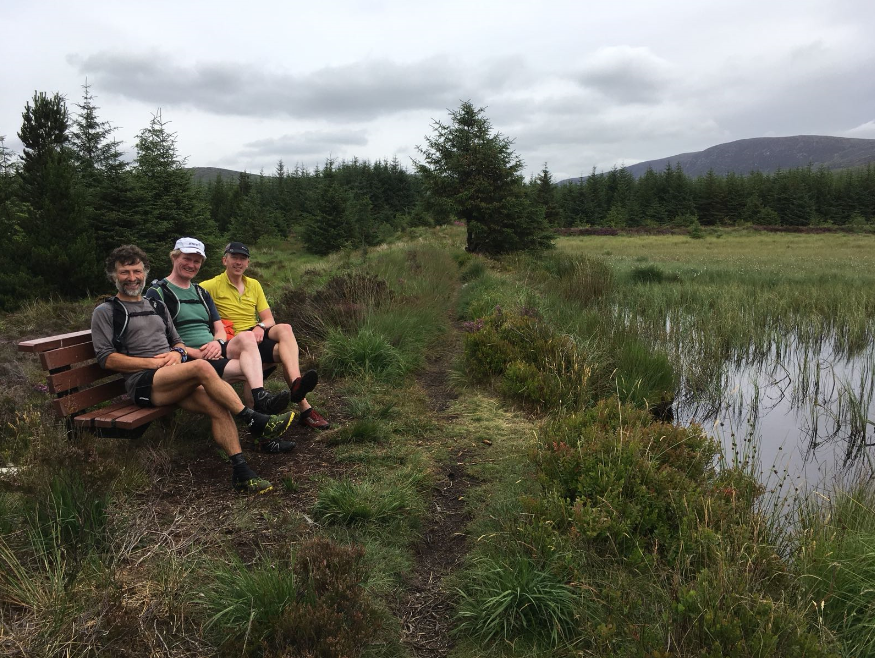 Sightseeing on the Denis Rankin Round. The picturesque Kilbroney Red Bog – who knew?

In need of dry socks and pain-relieving cocktails at Spelga

At our Spelga transition, there were some lame attempts to pick at the pizzas kindly bought for us by Neville, but stomachs were churning, knees were knackered and the priorities were more about dry socks and staying on top of rubs and aches. We obviously thought we still had ample time to complete our round, given how long we sat with Susan, the kids and Liam at the picnic tables! However, as we began the final stage, determined to stay together until the finish, it became apparent that we were under a bit of pressure. Team work became increasingly important to keep everyone moving together at some sort of reasonable pace over Spaltha, across the road and onto Ott. Darkness approached and a renewed focus, along with a set of walking poles, was required over the Meels to keep bodies and spirits alive! No-one was panicking yet, but we all knew that time was moving on and a few motivational words from Marty at the Meelmore – Bernagh col were welcome. As Bearnagh’s steep north slopes loomed, Stevie found an inner strength, I reminded myself that it’s my favourite training climb, and Marty and Clive continued to pull strongly as they’d done all day, so on reaching the summit we had put ourselves right back in it.

Young Liam met us again at the Hare’s Gap to top up our liquids and it was great to have his company and encouragement over the final tops. At this point, the rain had started and the wind had picked up, but there was definitely a sense that if we just kept going at this same pace, we’d get over the line before the cut-off. Knee pain and sick stomachs continued to make their presence felt but at Commedagh’s cairn with just over an hour and a half before timeout, there was a quiet sense of belief. It wasn’t the time, however, to make any navigational miscalculations (!) but in the cold wind and rain we found our line down off the hill. Recently fallen trees had required us to alter our homeward plan for Donard Forest and we made slow progress on the steep gradient, but friends and family finally saw the four little primal tracked dots on their screens arrive down to the main track along the river. Marty lead on the straightest line he knew through the forest, Clive shepherded at the rear and at last we popped out in Donard Park, running under the arch at 01.44, 23hrs 44mins after starting out. A precisely-timed round!

A huge shout of thanks to our support teams, to the Denis Rankin Round Committee, to Rowan of Primal Tracking and to Denis himself. The Round is a fine and fitting legacy.  We initially felt a huge relief to have successfully completed the challenge, but overriding all the aches and pains was that immense feeling of camaraderie and team spirit, and it being another mountain day of the finest quality spent with friends. Would we do it again? Absolutely. 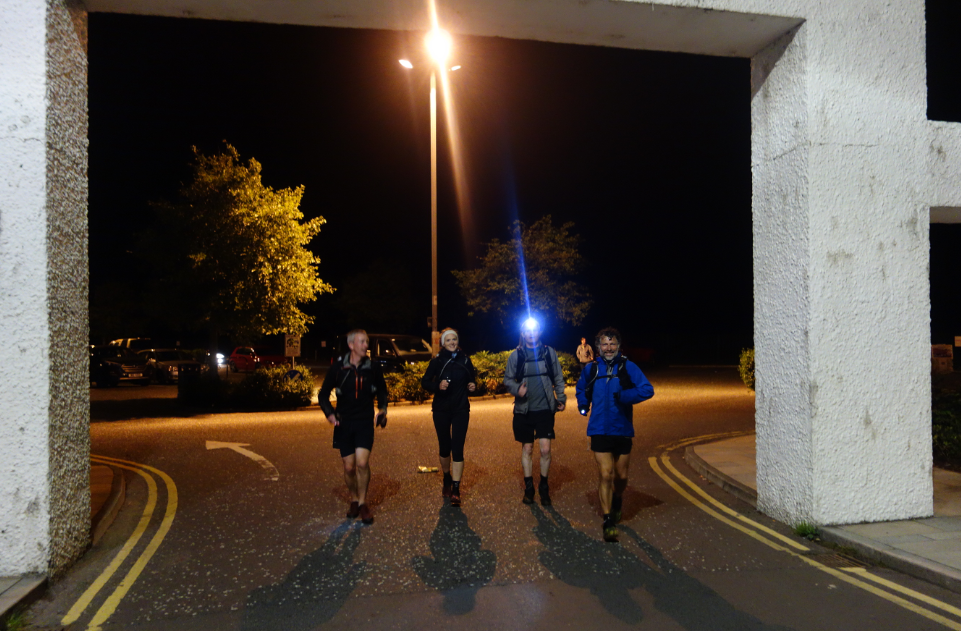 The end of a fine day out